One of the biggest lessons I think I've learned over the past few years is that you have to be very careful with what you make easy to do in a software system. 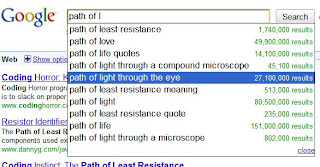 When you are working within a preexisting system, it is very hard to work effectively outside the bounds of that system. Whether you are limited by time constraints, peer pressure, political decisions or just pure technical inertia, those early/legacy decisions in a system will have long reaching impacts on the decisions of those who follow.

I'll give you an example. On a product I worked on for years, the decision to use an object relational mapper (ORM) in early stages was based on a desire to eliminate boilerplate code, reduce the learning curve for new developers and generally push the development of new entities down to the entire team rather than specializing this role in one person.  All in all the reasoning was sound, but the inability to see some of the psychological aspects that would impact the future had some serious impact on the future of the system.

* This can be avoided by having data contracts that are specific to the DAL
** There is nothing inherently wrong with ORM, and if your DAL is properly abstracted so that the ORM isn't propagated throughout the stack then this too isn't necessarily a problem.

I add those two caveats because I really don't have an issue with ORM, in fact I think used properly it makes way more sense then to waste days of development doing repetitive and simple CRUD work.

However the deeper issues that arose for us still focused on convenience. It was convenient to expose the friendly querying methods of the domain objects that mapped to our tables directly to the business logic assemblies. It was convenient to let junior developers write code that accessed those objects as if retrieval and persistence were magically O(1) operations. Of course in reality we discovered embarrassingly late that we had more than a few graphs of objects that were being loaded upon traversal, leading to a separate mapper triggered SELECT for each object and its children. This is the kind of thing that only becomes apparent when you test with large datasets and get off of your local machine and see some real latency.

And yes, in this case, I think you could argue that QA dropped the ball here. But as a professional software developer you really never want to see issues like this get that far.

I've picked one example, but there are many many others in the system I'm referring to. Including but not limited to a proliferation of configuration options and files, heavy conceptual reuse of classes and functionality that are only tangentially related to each other, and an increasing reliance on a "simple" mechanism to do work outside the main code base.

Ultimately, this post has less to do with ORM and proper abstraction and more to do with understanding how your current (and future) developers will react to those decisions. I think a conscious effort has to be paid to how a human will game your system. You need to come up with penalties for doing dumb things if possible, and the path of least resistance for the right ones.  There are entire books dedicated to framework and platform development that encompass some of these ideas, but they apply at every level really in my opinion. (except maybe the one man shop?)