A good friend of mine Sarah believes that the moon landings were a hoax. Despite being a huge science geek , a fan of NASA and a member of the planetary society she subscribes to the idea that man has not in fact walked on the moon, and the entire thing was a lie perpetrated in an effort to win the political war with the USSR. Or something along those lines.

Somehow this deeply disturbs me. Anything coming from Sarah carries considerable weight, so I can't just discard her opinion. How could it be that the same person avidly following the mars rover mission also believes that we couldn't land someone on the moon (or rather, didn't)? I can say that I have not watched/read/been brain washed by the same materials that she has, but I'm expecting to be convinced to do so after this post.

Skepticism is vitally important to science, no doubt. I think scientific thinkers must challenge anything that doesn't make sense to them. I myself am open to hearing the counter arguments, and I even spent a half hour or so reading the respective wikipedia articles on the matter...

I also think while conspiracy theories are fun (x-files we miss you) they are also wrong 99.99% of the time. In a time where science is considered elitist and unnecessary in one of the most important political, economic and scientific centers on earth, and when NASA continues to face diminishing budgets and smaller mandates it seems terribly unproductive to undermine those efforts being made by real engineers and scientists by giving credence to crack pot theories about hoaxes.

Consider how difficult it is to keep a secret. Imagine the incentive to those cynical people out there who wish to undermine the real achievements of science. Remember the movie contact and Ocham's Razor? Do we make hundreds of assumptions about the ability for hundreds of people in the government, at NASA and elsewhere all keeping a secret about the landings? That the telemetry mirrors left behind were done by unmanned missions (and that we had the robotics capable at that time to do so?) That the long documentation trail left behind from all the steps leading up to Apollo 11 were somehow part of it? That the FIVE additional moon landings (after the public had already lost interest) were also faked just to add weight to the first faked landing? Or can we assume that no such plot exists and that NASA's account is roughly accurate? I realize you can flip this and play the other side, but you can read the articles for the details rather than me iterating through the arguments that have already been made on both sides.

I have to admit, I want to believe. I want to believe that we really did achieve the mantel of a moon landing. That we as a culture were able to step outside of our regular bullshit to come together and accomplish something truly spectacular for mankind. 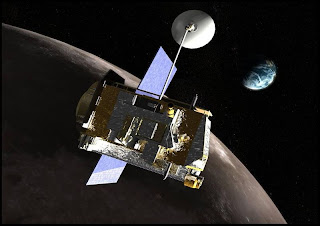 LRO - finally time to shut up the crackpots
In any case, the only real reason I started this post, besides to provoke you Sarah, was so that I could mention the upcoming Lunar Reconnaissance Orbiter , a mission I will be really looking forward to. It looks like we're going to get a lot more familiar with our friend the moon. This can only be a good thing as privatized space exploration steps up and produces more tourism and public interest in things beyond our humble planet. The moon may seem a bit provincial at this point, but if you were to seriously consider visiting it (when you make your millions on the internet) do you not get totally stoked? It seems like the next logical jumping point for our more grandiose visions. LRO is launching in early 2009 from Cape Canaveral this mission will include (from wikipedia)

And onboard instrumentation will most importantly include :
LROC — The Lunar Reconnaissance Orbiter Camera (LROC) has been designed to address the measurement requirements of landing site certification and polar illumination.[11] LROC comprises a pair of narrow-angle cameras (NAC) and a single wide-angle camera (WAC). LROC will fly several times over the historic Apollo lunar landing sites, with the camera's high resolution, the lunar rovers and Lunar Module descent stages and their respective shadows will be clearly visible. It is expected that this photography will boost public acknowledgement of the validity of the  landings, and discredit the Apollo conspiracy theories.[12]


It will be nice to put this to rest. Long live Elvis.
Posted on Tuesday, November 11, 2008
Email ThisBlogThis!Share to TwitterShare to FacebookShare to Pinterest
Labels: opinion, science
Newer Post Older Post Home