So I've actually started my blogquotes project which was intended as a widget style provider for random quotes (from a personal library) to appear somewhere on my site. I'm using the new Google app engine for this project and so far I have to say it's pretty damn easy. From barely knowing python to having a django templated, gql driven tiny quote engine. Granted it's the "hello world" of web apps, but still considering I have an application running on Google, with built-in authentication and datastore .... I'm pretty impressed.

I've played with ruby on rails before, but so far I'm far more comfortable with what I'm building here than I ever was with Ruby. (I don't think I'll start detailing that here and now as this post is more about my gadget plans and I don't care) 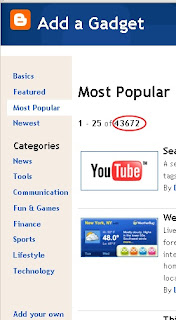 So I have my application, and I have the beginnings of the backend for my quote providers. I just went to draft.blogger.com where google tests out new features and clicked "add gadget" from the layout view of the blog. I actually thought that what I was looking at was a mistake. 43,000 page elements and gadgets? How is that useful to anyone? How am I not just making the problem worse by adding another one that no one will find and no one but me will use? This is just insane.

I did a search for quote on that page and it returned 13, thankfully none of them are what I have in mind. They are all basically syndication style "[fill in topic] quote of the day" style widgets. There actually seem to be a surprising number of gadgets like that. Things that just don't really allow the user to add anything meaningful or contextual to the web. I suppose a lot of people use their blogs as their home page, but for me having the weather and a stock ticker on my blog just doesn't make sense. My Google home page sure, but on millions of public blogs not so much.

There also seems to be too many thinly disguised marketing devices and cheap looking ad-style nothing widgets. Personally I would like to see more of the types of gadgets that Google themselves are creating, where user generated content is the focus (my youtube videos, my picasa albums, my google docs etc) as opposed to content that is one size fits all for millions of blogs. At least it gives me some hope that what I'm doing is not a complete right off.

The data won't stick, but if you have a google account you can log in and add a quote to the pre-alpha-hello-world-version of blog quotes at http://blogquotes.appspot.com
Posted on Friday, June 13, 2008
Email ThisBlogThis!Share to TwitterShare to FacebookShare to Pinterest
Labels: blogging, blogquotes, google
Newer Post Older Post Home